Speaking of growing up: Our biggest little girl officially dreams.  And I can't tell you how badly I wish I could say that she dreams of amazing, wonderful things like Never Ending Picnics and hanging out with Millie Measure.  Instead, she just seems to be having nightmares.

The first one was terrifying as it happened, but really adorable and so much fun the next morning and in the days that followed.  We woke up to her shrieking.  Ellie screams and cries a lot in the middle of the night and she always has, but this was a scream that David and I both immediately responded to, knowing it was different than her usual cry and very far from her regular attempts to get out of sleep for the night ("my need Os," "mommy, are you?" "I pooped!")  When David went in her room she told him that she saw a Really Scary Monster.  HUH?  How does she know about monsters? and since when does she know what it means to be scared?  With a little prodding from David as he tried to figure out if she got scared by one of her stuffed animals (Foofa is sweet, I'm sure, but those eyes might be a little intimidating in a dark room), Ellie continued to explain that The Really Scary Monster was laying under Foofa and it bit her toe.  She eventually calmed down and slept the rest of the night.  It wasn't until the morning when she brought it up again, adding that The Really Scary Monster was purple and looked like a squirrel.  What did The Really Scary Monster do?  He said "Hi!"  She talked about it for a few days and we tried to enjoy her imagination without encouraging her to dwell on it too much and eventually she stopped talking about it.  We told her that if The Really Scary Monster came back, she could just sing the Goodbye Song, and he'd go away.  That's the cure for monsters, you know?

We tried talking to her for awhile about some awesome dreams that she could have--driving racecars! going swimming! eating ice cream! but until last night she hadn't let us know of any other dreams.  When I was laying with her as she fell asleep last night (don't ask--it's the never-ending-never-getting-better nighttime routine), she suddenly shot straight up next to me, "Ellie fall fall fall upside-down. Really really scary."  She repeated it over and over while I told her Mommy was there and she was okay.  She's been trying to fall asleep tonight since 8:30 (it's almost 11).  She seems almost out then sits up crying out of nowhere.  I went in to lay with her at some point and she says, through tears, "Hi. Ellie fall really really high.  Ellie fall in the sky."  She asks me to lay with her and after a few minutes when I get up to leave, she asks me to stay.

My poor girl.  How are we even supposed to deal with scary dreams?  I know how real my dreams feel sometimes (yes, maybe I've held David accountable the next morning for what "David" did in my dream the night before), so how can we even begin to expect her to separate what's real and what's a fantasy??? 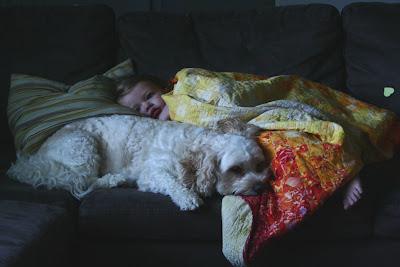 Poor Ellie. Audrey has nightmares, too. It's the pits.

If it makes you feel any better to know you're not alone, I lie with Audrey until she falls asleep, too. It's hard to lose those hours of the day (it's definitely HOURS for me), but I'm sure it won't last forever. ;)